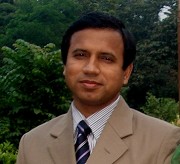 Haemonchus contortus is the most prevalent parasitic nematode among the Trichostrongylids causing severe health hazards leading to production losses in small ruminants around the world. This study was conducted to explore genetic variation within and among H. contortus populations from seven topographic zones of Bangladesh in small ruminants using second internal transcribed spacer (ITS-2) of nuclear ribosomal DNA and the mitochondrial nicotinamide dehydrogenase subunit 4 (nad4) genes. To do this, a total of 95 adult H. contortus were collected from abomasa of slaughtered sheep and goats from seven different geographic zones of Bangladesh. After the extraction of DNA, ITS-2 of nuclear ribosomal DNA and partial region of the mitochondrial nad4 genes were amplified and sequenced for 95 and 85 worms, respectively. After editing and alignment, sequences were employed for analysis to determine sequence variation, genetic diversity and population genetic structure. Genetic analysis defined 19 distinct ITS-2 genotypes and 77 unique nad4 haplotypes among the H. contorts isolates. The nucleotide diversities were 0.0098 and 0.025 for ITS-2 and nad4 gene, respectively. Phylogenetic analysis (neighbor joining, maximum likelihood and maximum parsimony) of haplotypes indicated the existence of two populations without marked specification of host and locations within H. contortus populations in Bangladesh. By population genetic analysis, 93.67% of genetic variance was partitioned within the population. Very low genetic differentiation but high gene flow was observed among different populations of H. contortus in Bangladesh. This is the first study on genetic variability of H. contortus isolates of small ruminants in Bangladesh. Our study could be the basis for further molecular epidemiological studies, using more discriminative markers and tracing possible changes in the population structure of H. contortus.