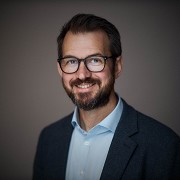 Paul Brennan received his PhD in organic chemistry from the University of California, Berkeley under the mentorship of Paul Bartlett working on synthetic methodology for combinatorial chemistry and synthesizing inhibitors for new anti-bacterial targets. Following three years of post-doctoral research with Steve Ley in Cambridge University on the total synthesis of rapamycin, Paul returned to California to take a position at Amgen. His research was focussed on designing and synthesizing kinase inhibitors for oncology. After two years at Amgen, Paul accepted a position as medicinal chemistry design lead at Pfizer in Sandwich, UK.
Over the next six years Paul designed and synthesized compounds for most major drug classes: kinases, GPCR’s, CNS-targets, ion-channels and metabolic enzymes. In 2011 Paul joined the Structural Genomics Consortium as a principal investigator to discover chemical probes for epigenetic proteins. He is currently a Professor of Medicinal Chemistry and head of chemistry of the Alzheimer’s Research UK Oxford Drug Discovery Institute in the Centre for Medicines Discovery at the University of Oxford. His research is focused on finding new treatments for dementia and discovering chemical probes for novel protein families.