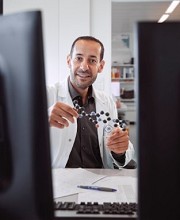 Dr H. Ratni is a Distinguished Scientist, Medicinal Chemistry, at F. Hoffmann-La Roche Ltd., Basel, Switzerland. He successfully, bring from early research to the clinic 6 molecules, one already successfully launched.
He received his PhD at the University of Geneva and did a post-doc at Tokyo University before joining F. Hoffmann-La Roche Ltd in 2001. His research has mainly been devoted to the areas of neuroscience (e.g. V1a receptor antagonist, in human clinical trials, phase 3, for autism). In 2005, he participated in a secondment within the Roche group at Chugai Pharmaceutical Co. Ltd, Gotemba Japan. He was the chemistry discovery project leader of the SMN program for the treatment of spinal muscular atrophy, and is the inventor of Risdiplam (Evrysdi). His current focus is on gamma secretase modulator for Alzheimer disease.
He is an author or co-author of more than 115 patents and publications and received the following awards: - 2014: Roche Leo Sternbach Award for Innovation in Chemistry.
- 2016: Gold medal at the Roche Patent Inventor’s recognition event.
- 2019: Paper of the year award by the Society of Toxicology (DDTSS)
- 2020: Roche CEO Award for Excellence
- 2020: Senior Industrial Science Award by the Swiss Chemical Society (SCS)