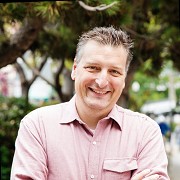 Guido Lanza is the VP of Integrated Research at Valo where he joined as part of the acquisition of Numerate, where he was CEO. Guido co-founded Numerate in 2007, along with a team of computer scientists and drug hunters. Their vision was to change the discovery paradigm through AI – to unlock inaccessible emerging biology and to build a platform capable of learning from all previous data (and mistakes) in the industry. He has led Numerate’s efforts to secure multiple rounds of funding, as well as secured several high-profile collaborations with large Pharma companies. As the company grew, they evolved their business model from being primarily a medicinal chemistry service provider for Pharma to an AI-driven company with major Pharma alliances, high-profile academic collaborations, and a pipeline of first-in-class therapeutic programs. This has given Guido a unique perspective on having to simultaneously solve scientific, technological, and business-related challenges of building a successful company based on a proprietary AI platform.

Prior to Numerate, in 2001 Guido co-founded and was the CTO of another algorithm-focused biotech startup (Pharmix), where he led the development and application of the drug discovery platform. Guido’s background is in Molecular Biology (UC Berkeley) and Bioinformatics (U. of Manchester).