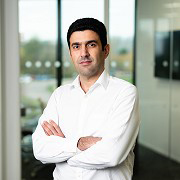 Ali Jazayeri joined OMass Therapeutics in October 2018. He was previously Chief Technology Officer of Heptares Therapeutics, a company he joined in 2007 as one of the first scientists and was involved in the transfer of the GPCR stabilisation technology from the MRC Laboratory of Molecular Biology to Heptares. Following successful implementation and industrialisation of the original technology, he led the development of novel methodologies that significantly increased the efficiency and reach of the technology and resulted in the generation of novel IP. Prior to Heptares, Ali worked as a post-doctoral scientist in Clare Hall Laboratories (a Cancer Research UK institute) and Kudos Pharmaceuticals (later acquired by AstraZeneca) where he carried out research on the role of cell cycle checkpoint kinases in DNA damage response pathways. He has a BSc in Genetics from University of Manchester and obtained his PhD in molecular biology with Prof Steve Jackson at the Gurdon Institute from University of Cambridge.
Email
Please login to send a Private Message