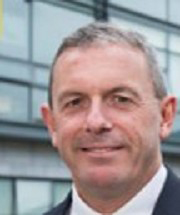 Paul Ross was appointed as Director of APC Microbiome Ireland in June 2019 and is also Professor of Microbiology at University College Cork. For the previous 5 years, he was Head of the College of Science, Engineering and Food Science at the University. Prior to that he was Head of the Teagasc (National) Food Research Programme (Moorepark & Ashtown Food Research Centres). APC Microbiome Ireland is an SFI-funded Institute devoted to the study of the human microbiota and it’s relationship to food and human health. Pauls main research interests are in gut microbiota, antimicrobial peptides, bacteriocins, bacteriophage, and anti-infectives. He was conferred in March 2009 with a D.Sc. from the National University of Ireland (N.U.I.) based on published works. He has won many awards including the Distinguished Service Award from The American Dairy Science Association in June 2017. He was elected a member of The Royal Irish Academy (RIA) in May 2010 and a Fellow of the American Academy for Microbiology (AAM) in 2014.