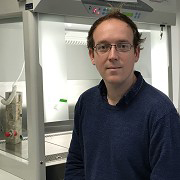 Charlie is a stem cell biologist working to understand the causes of Alzheimer’s disease (AD). During his PhD at Imperial College London he developed methods to generate human neurons from stem cells. At the Institute of Neurology at UCL, he now uses induced pluripotent stem cell technology to make stem cells from skin cells, donated from research participants with AD gene mutations. With these stem cells, and the subsequent generation of neurons in culture, he can probe early disease events in human neurons for the first time.