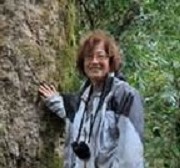 Dr. Wright has made major contributions in the biology, ecology, conservation and behavior of living primates. She discovered a new species of lemur, Hapalemur aureus in 1987 and helped establish Madagascar’s Ranomafana National Park in 1991 to protect it. Her research concerns focus on behavior, senescence, parasitology, predation, rainforest ecology, climate change and conservation studies of Malagasy lemurs. Patricia Wright earned a BA from Hood College in 1966 and a PhD in Anthropology from City University of New York in 1985. Dr. Wright has led over 40 field expeditions to Peru, Paraguay, East Malaysia, the Philippines and Madagascar. She has held professional appointments at Duke (1983-91) and Stony Brook Universities (1991-2014) and is the Executive Director of the Institute for the Conservation of Tropical Environments at Stony Brook University (1992-2014) and the Founder and International Director of the Centre ValBio Research Campus at Ranomafana National Park, Madagascar. She has authored over 150 scientific publications and has received many high honors.

She is a member of the American Association for the Advancement of Science (2004) as well as other professional associations. She was awarded a John D. and Catherine T. MacArthur Foundation Fellowship (1989-1994), a “Knight of the National Order” in 1995, the “Officier Medal” in 2003 and the “Commandeur Medal” in 2012 by the government of Madagascar. Other awards include the Hauptman Woodward Pioneer in Science Medal (2008), Distinguished Primatologist Award from American Society of Primatology (2008), honorary degrees from Hood College and the University of Antananarivo and a Distinguished Alumnae Award from Hood College (2008). In 2012, and again in 2014 she has been selected as one of six finalists for the internationally recognized Indianapolis Prize for Conservation. Her books include “Madagascar: Forests of our Ancestors”, “Tarsiers: Past, Present and Future”, and “High Moon over the Amazon: My Quest to Understand the Monkeys of the Night.” Dr. Wright was a member of the National Geographic Society Committee for Research and Exploration, and NGS Conservation Trust. She continues to be on the Scientific Advisory Board of the Duke Lemur Center, a member of the Madagascar Fauna Group and the International Union for the Conservation of Nature Species Survival Commission (IUCN SSC) Primate Specialist Group. Her work has been featured in the film “Me and Isaac Newton” directed by Michael Apted (1999) and IMAX’s “Island of Lemurs: Madagascar 3D” directed by David Douglas (2014). Dr. Wright was elected to the American Philosophical Society in 2013.